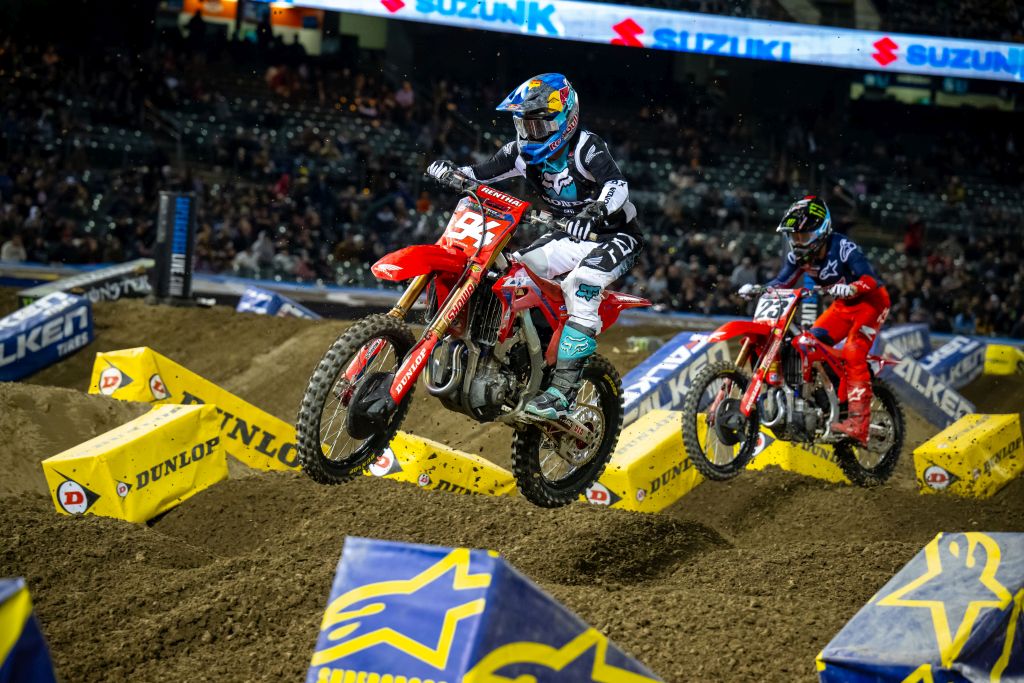 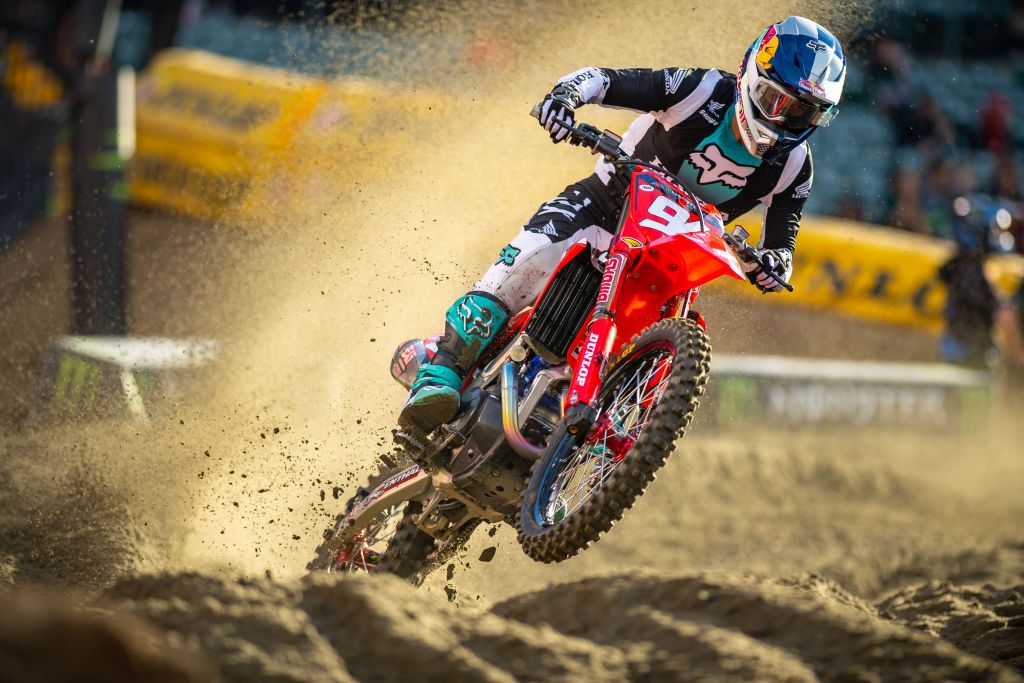 Ken Roczen: ​​“Not really much to say about Oakland. I feel like the day already started off kind of weird and we weren’t really feeling that great on the track, but we did the best we could. Chase [Sexton] and I went down pretty dang hard in the last qualifying practice. I got really lucky that nothing worse happened, as Chase kind of used my head as a whoop! It all happened so quickly and it was ultimately just me going down and falling into the wrong spot. The heat race was decent; I got second there. Going into the night show I put everything aside and tried to stay calm. We got off to a decent start, but I was probably around fourth or fifth and just struggled in the whoops; we’re just not good enough in them and we have to get better. That was a spot that bit me again, and after that there really wasn’t that much I could do. I finished 13th, but I’m going to keep my head up and charge hard again next weekend..” 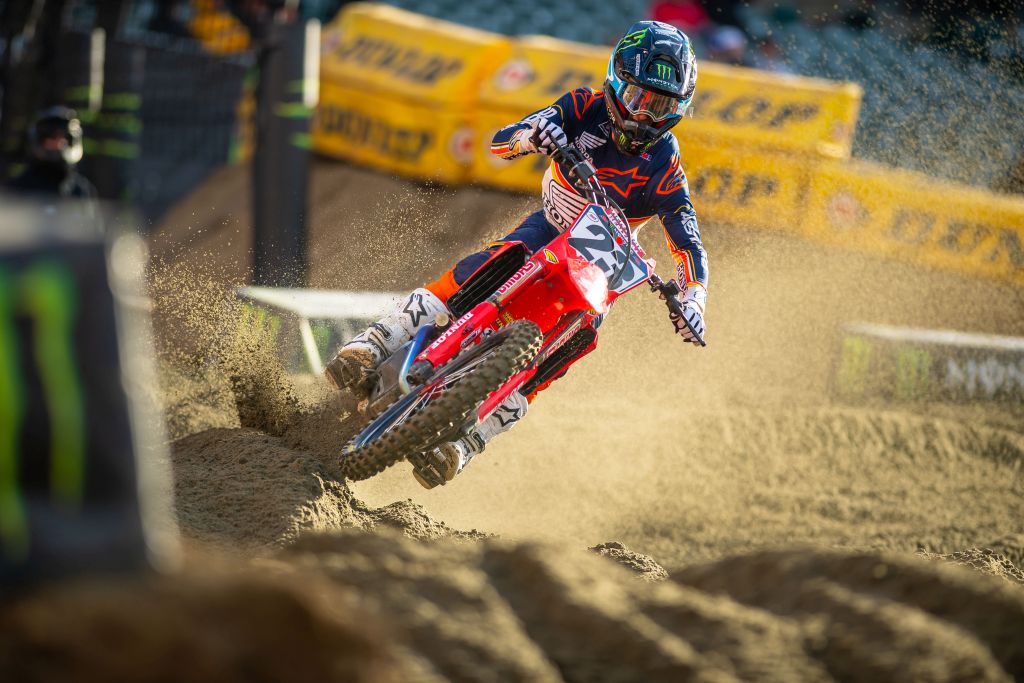 Chase Sexton: “Round 2 in Oakland started off good; the first couple of qualifying sessions were good and then everything kind of went downhill. Ken and I got together in the final session and both of us went down pretty hard. After that, I actually ended up winning my heat race but besides that I kind of just felt uncomfortable in the whoops and with the track in general. It was a tough day for me, but I’m hopeful for a better finish in San Diego. I’m excited to get back to work this week and get ready for next weekend.” 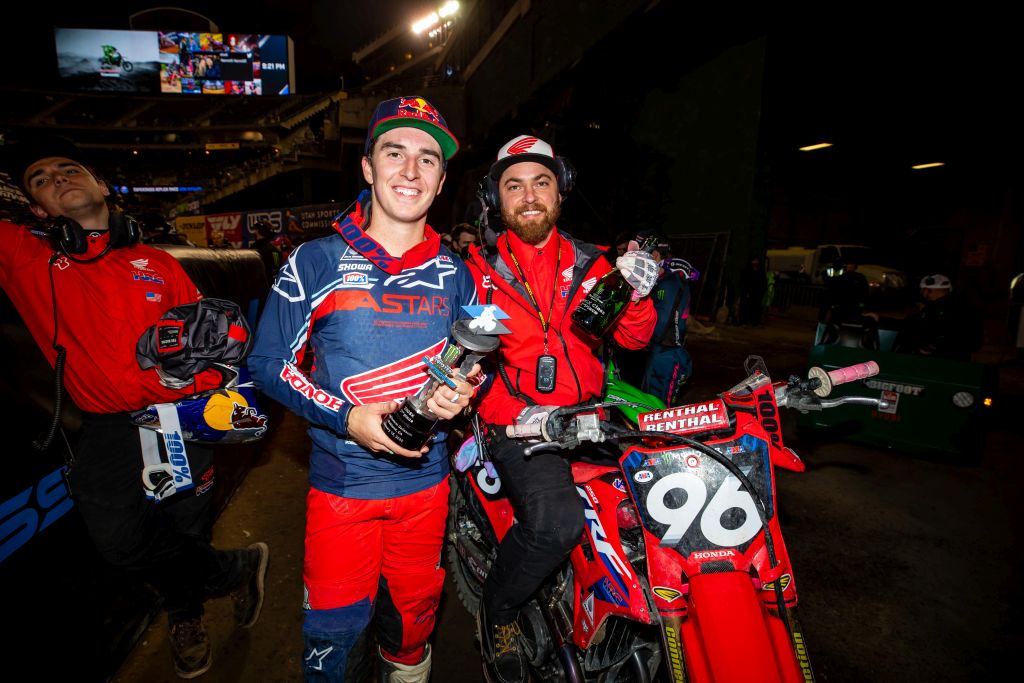 Hunter Lawrence: “Oakland wasn’t a bad night; we got second overall. Still, I’m definitely a bit frustrated. I had a few more laps than last weekend to work on Seth [Hammaker], and we had a good battle. He was riding really well in the beginning, so I had to keep just pushing through. My start wasn’t ideal, so we’re going to be working on that this week, but we’re fit and healthy. Next weekend we’re moving on to San Diego, so hopefully that will be a good race.”

Lars Lindstrom -Team Manager: “Well, tonight didn’t go as smoothly as last weekend did. We had some ups and downs in practice, between learning the track and the incident between Kenny and Chase. Luckily, both riders were able to avoid serious injury after a scary moment, and I was very proud of all three guys for rebounding and coming out swinging for the heat races. Hunter rode fantastic after a mediocre start in the 250SX main, and he once again showed that he’ll be a force to reckon with in this series. The 450SX main event didn’t go as planned, with Kenny‘s fall while running fifth and Chase having his own issues keeping him from running with the top guys. With all the mixup, and all of the parity in the class, luckily we didn’t lose many points with either rider. We’ll regroup and do our best as a team to improve and come out to challenge for the win in San Diego.” 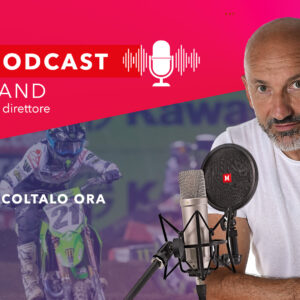