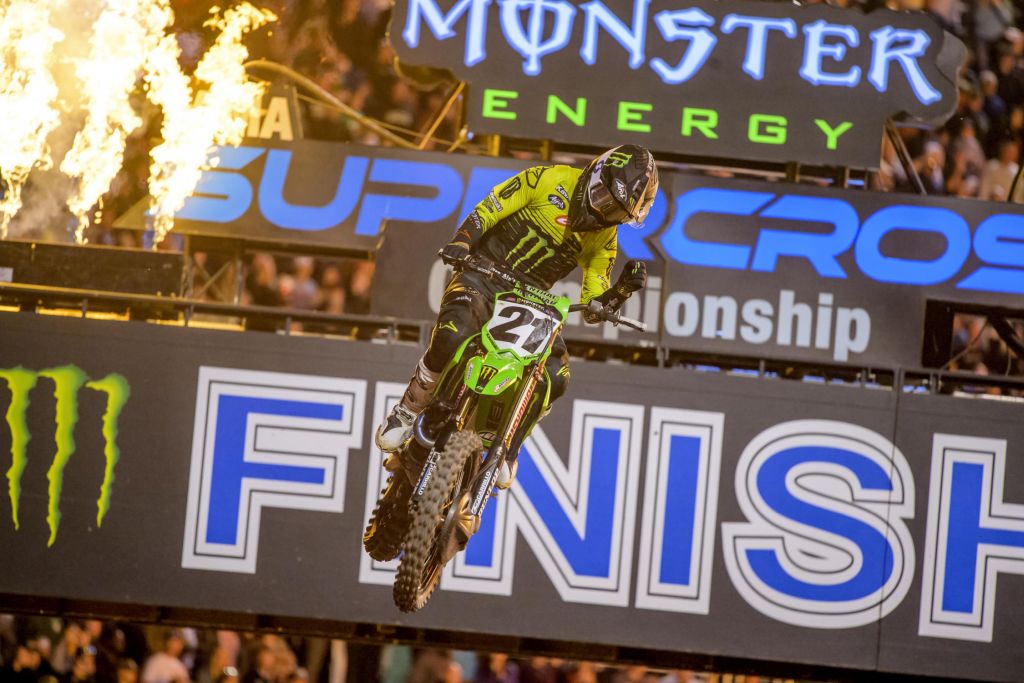 Jason Anderson: “It’s surreal to be riding this good. To be able to have this many wins after the last couple of years, I’ve been on a dry run, I haven’t had any wins, so to be able to have a year like this and switch teams and everything comes to fruition that I’ve worked for, it’s amazing. I’m thankful, I’m in a good spot right now, and I don’t want to take it for granted.” 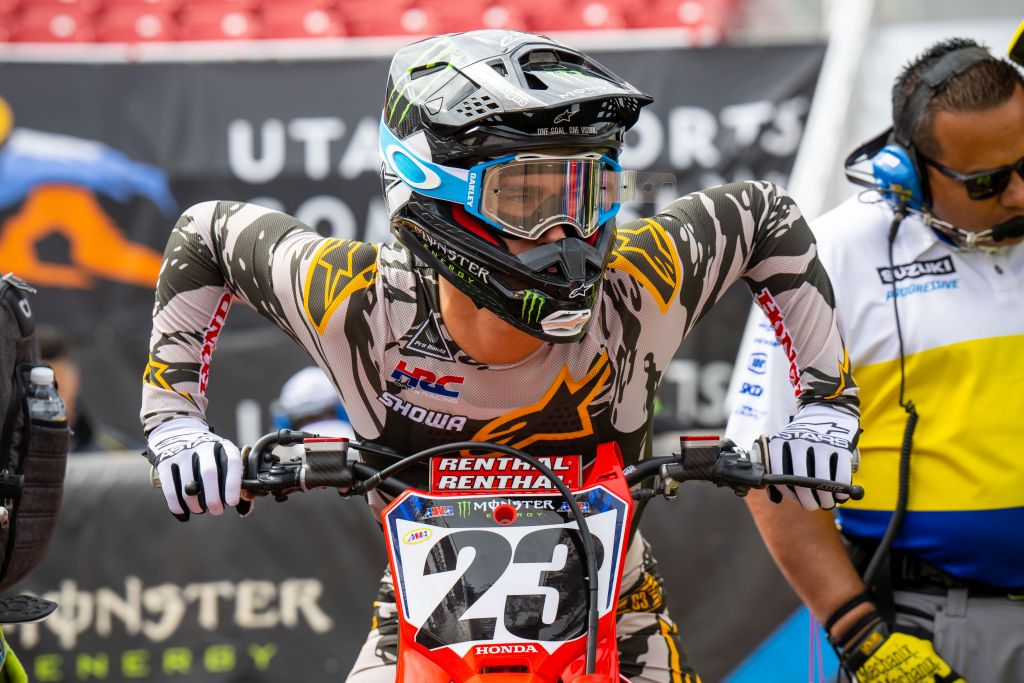 Chase Sexton: “At the beginning, Jason [Anderson] and I had a really good pace going. I made a few mistakes and kind of lost my flow a little bit, and once I lost touch, there was no getting it back; he was riding really good. Lappers did come into play, but he had to deal with them just like I did. It was a tough racetrack. I struggled in the dry, slick parts, but I was happy they put a lot of water down for the night show; it plays to my strengths when there’s ruts on the track. I’m happy to end the season on a somewhat high note. Minus three races where I didn’t finish, everything else was really good. I was in the top five pretty much every race, and eight podiums and a win is big progress from last year. That was my goal coming into this year; I wanted to be a little bit calmer. I still had a few moments out there, but I made a lot of progress with my riding and mentality. I just want to keep progressing. I’ve got a lot of work to do, but I feel like I’m on the right track. I’m looking forward to the outdoors and next year racing supercross. It’s going to be fun.” 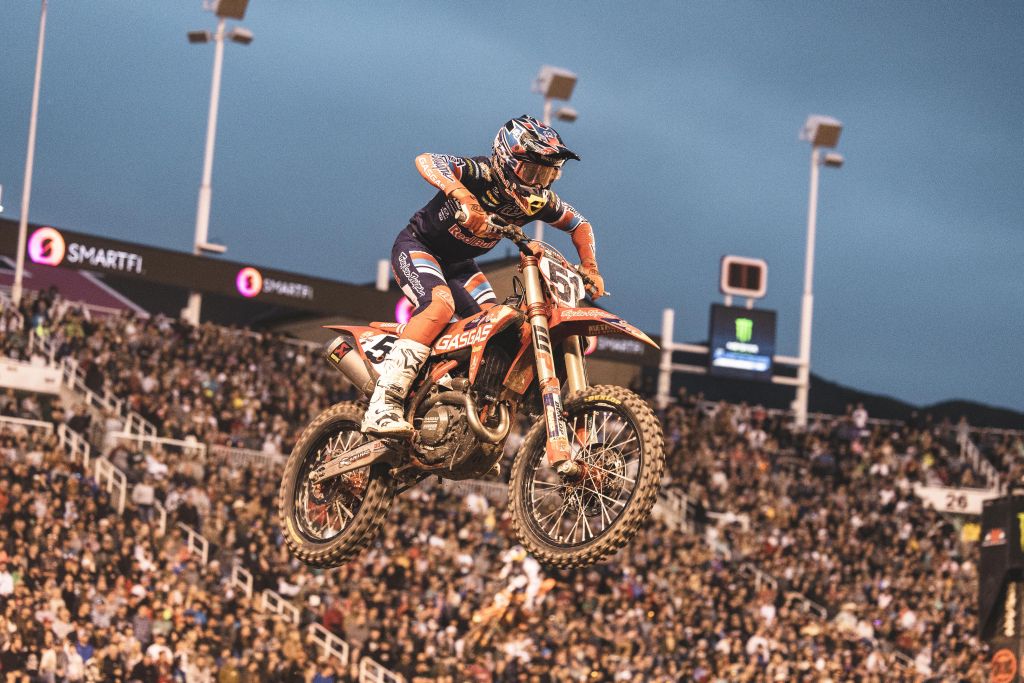 Justin Barcia: “ I’m happy to end the supercross series with a podium finish here in Salt Lake City. Obviously, tonight’s racing was intense but we were racing for third in the championship and I was going for it. All-in-all, I’m stoked with how the season went, we had a lot of fun together as a team and we definitely have some positives to take away and bring into the outdoor series.” 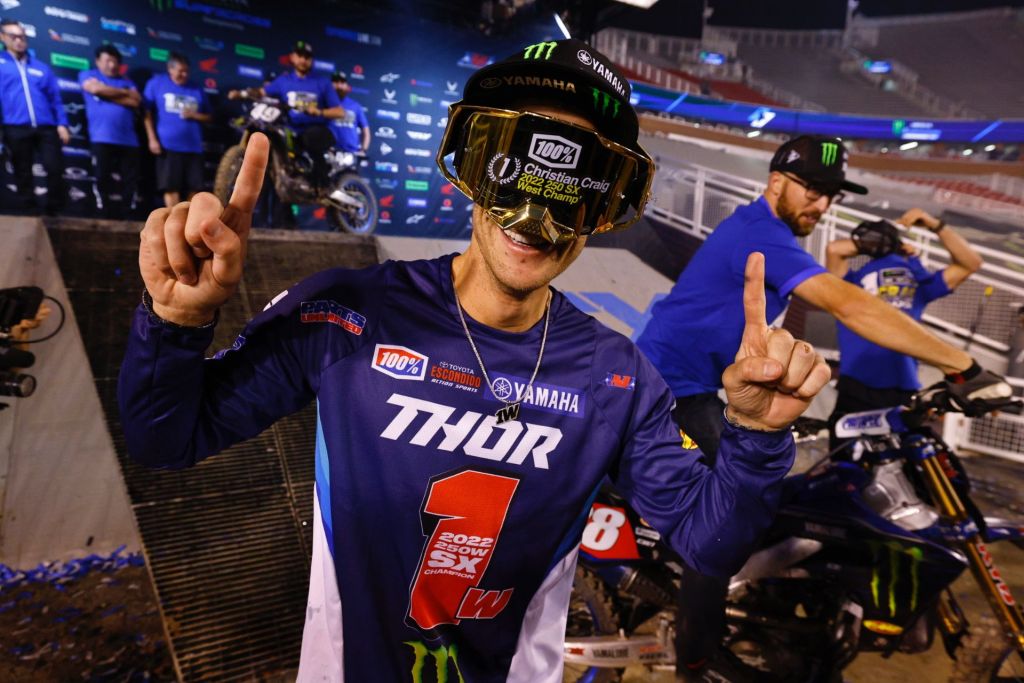 Christian Craig: “Obviously, there was a lot of pressure throughout the day with the championship on the line and being the last round, but I feel like I handled it all pretty well. I just took it practice by practice and enjoyed every moment. I was treating it like any other race, but at the same time, I also knew what could happen. In the main event, I was riding a little tight, knowing where I was and where I needed to be, and finished eighth to clinch this title. This is something I’ve dreamed of and worked for my whole life. I’m just going to sit here and enjoy it.” 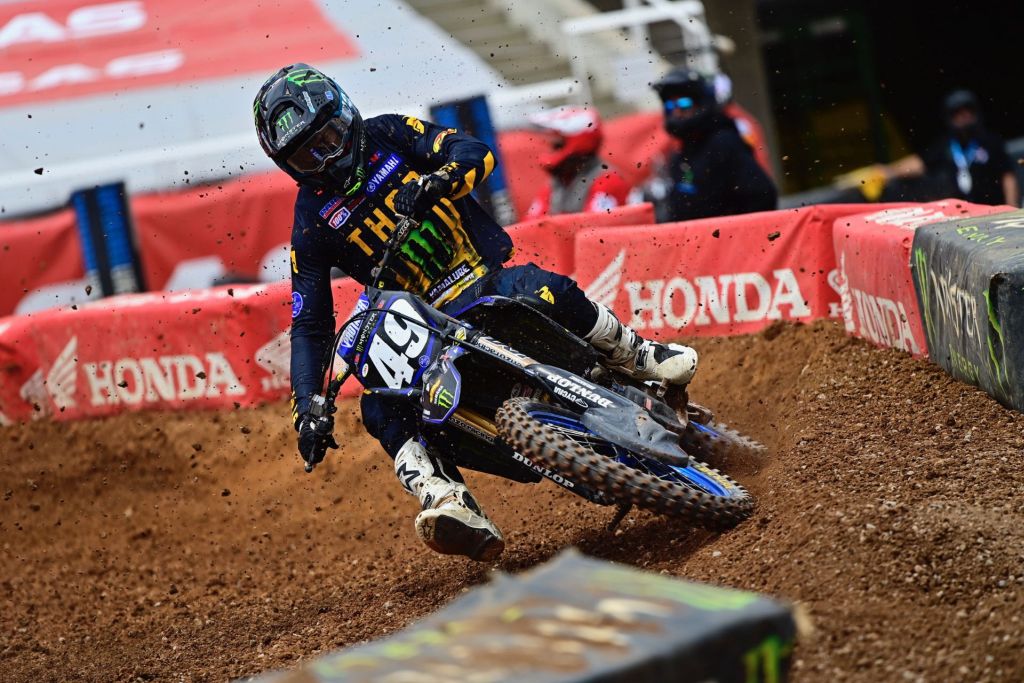 Nate Thrasher: “I felt pretty good all day. I’ve been working on my starts quite a bit and finally came out in the top five in the heat race and got into second. Christian was a little too far ahead to go and make a run for the heat win, but I matched his times, so I felt like I had the speed coming into the night. Then in the main event, I had the speed early and was way faster than anybody else. I moved through and just tried to get to the front as quickly as I could. It was tough with Christian having a championship to win and I didn’t want to get in between that, so I tried to get around him as quickly as possible. After I got around him, I then tried to chase down Hunter (Lawrence) and knew that the best thing for me to do was go and beat him, and that’s what I did.” 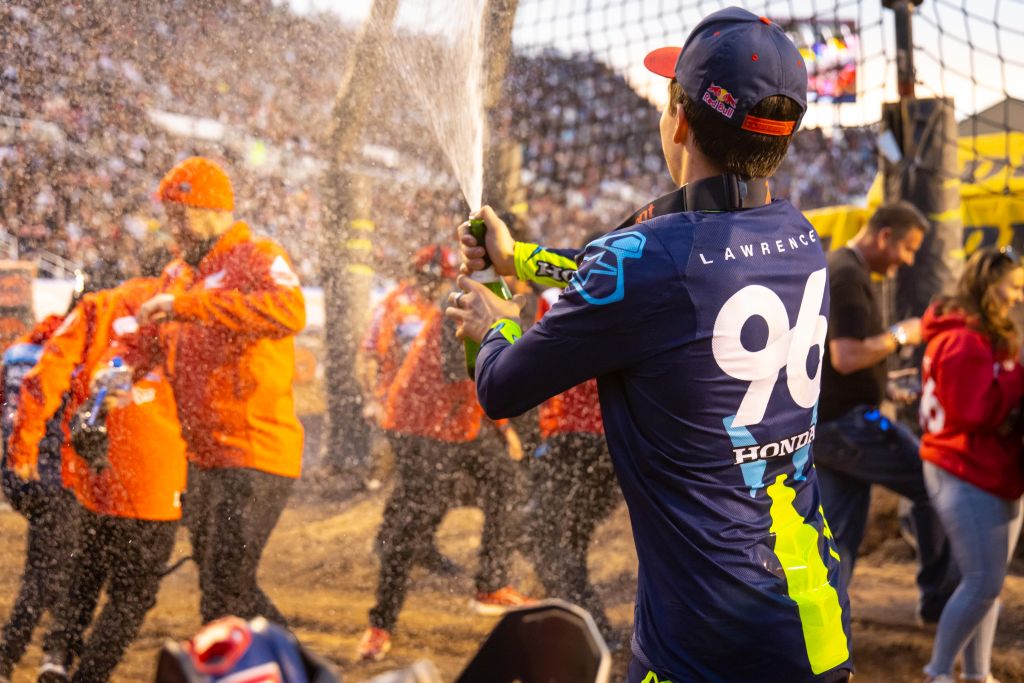 Hunter Lawrence: “On the first few laps, I was jumping through the whoops, which I lost a lot of time on. I didn’t have that extra bit of energy and strength tonight, so I was watching the clock, trying to time gassing myself out. It was tough, a good race. [Nate Thrasher] was really close in a few spots, and I thought if I went a little more it may have crossed the line and put both of us on the ground. I just kept it clean, and it was a good race. Every year you see what’s kind of trending with the champions that win the class; the first thing that comes to mind is you obviously have to win, but also be on the box every round, so that was one of my big goals this year. I did that at every race I finished, bar A3 where I crashed out. That’s huge to tick that box in my book, so a lot of positives. We fell short a little bit, but I’m still not mad on the season. I proved a lot to myself and to other people. I left it all out there and tried my best every race.” 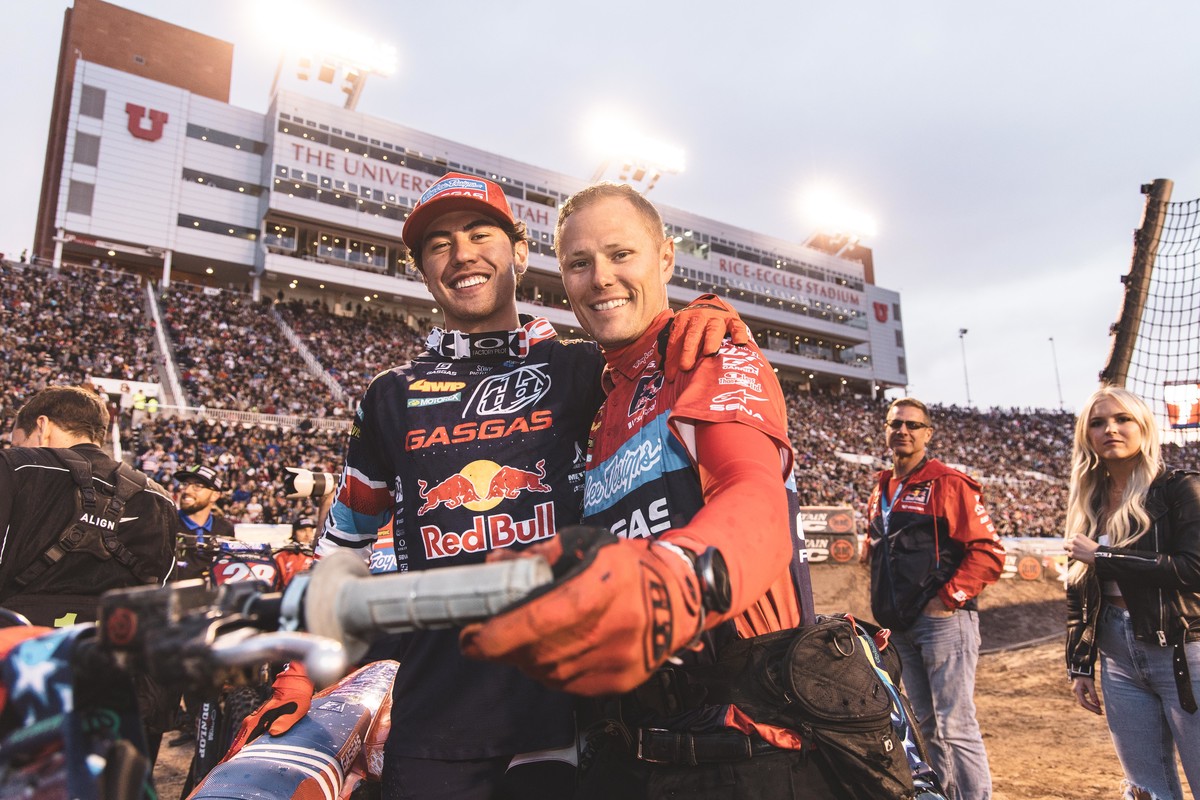 Pierce Brown: “It was a good day. I had a tough heat race, I made a couple mistakes and got together with a couple riders but we pulled it together for the LCQ. In the Main Event, I trusted myself and committed from the outside gate and ended up top-five in the first couple laps. I passed a few guys and ended up third on the night. I was the first east coast guy and that felt good also. All-in-all, I’m stoked on the season, we clinched third in the series, which is my best supercross season yet, and I’m really excited with how we grew all season with the team and I’m just stoked for more!” 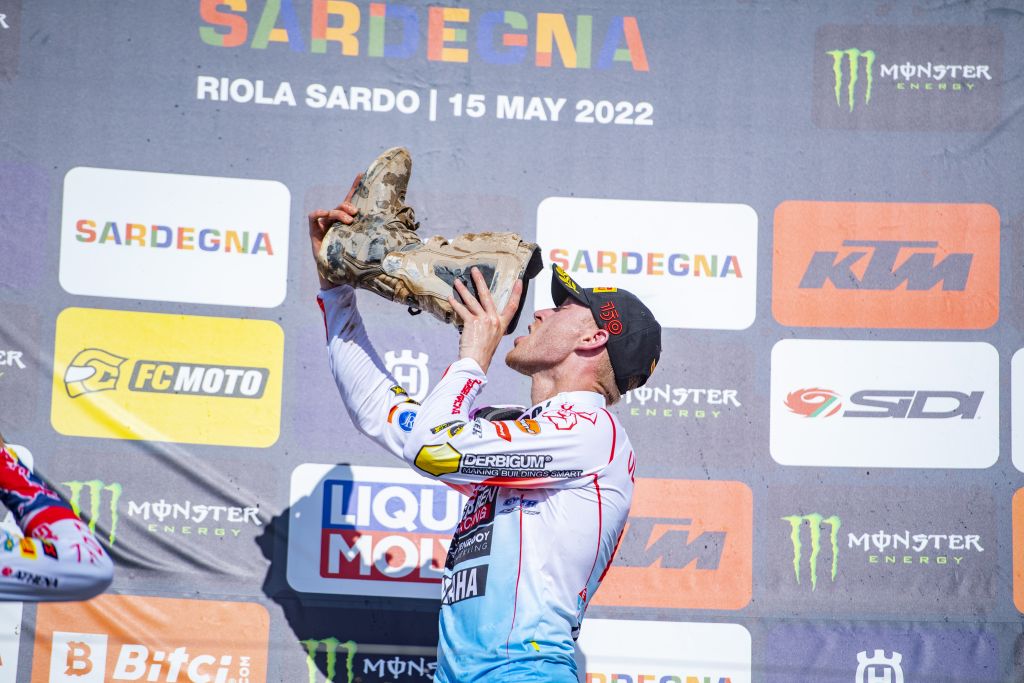 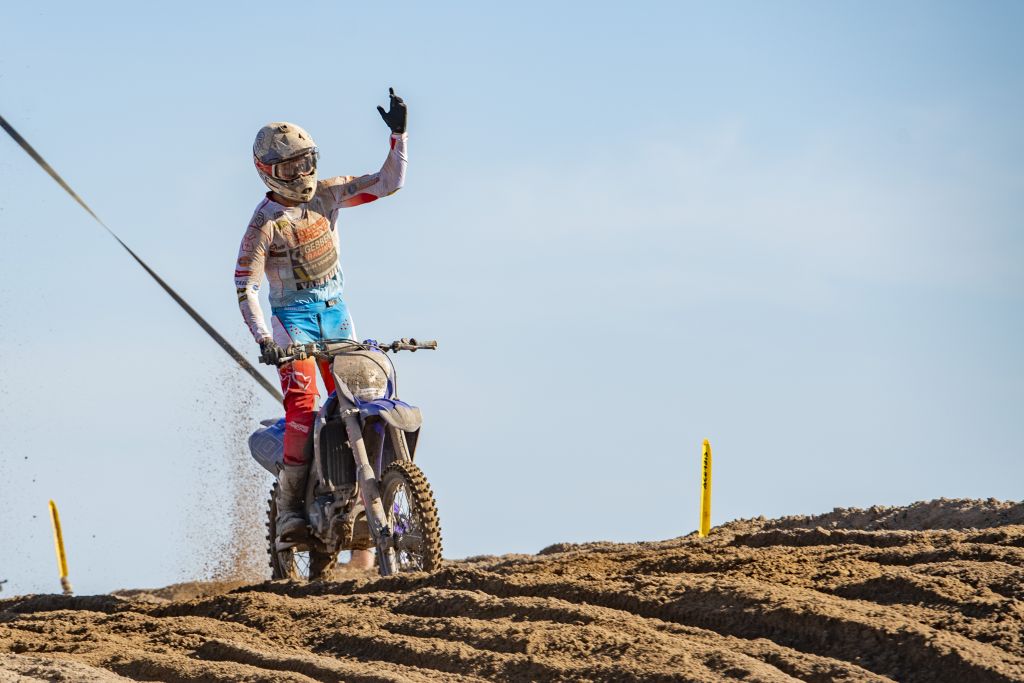 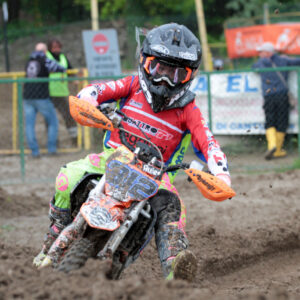